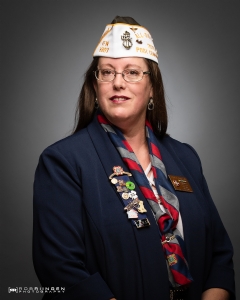 Paula Jansen is an amazing lady who can often be found quietly working hard as the first female Commander for VFW Post 5867.  She rarely points out her military service— a successful career that culminated in retiring from the U.S. Navy as a Chief Petty Officer after 21 years on Active Duty, nor does she point out that she is currently working on her second career.  Instead, Paula humbly shows up early to VFW events and hands out "Buddy” poppies to everyone present for remembrance; she pulls together fundraisers that benefit the entire community while specifically focusing on veterans; she pores over spreadsheets tracking membership, preps salad for community dinners, installs murals at the post honoring the separate branches of service, cheerfully interacts with everyone who comes into the post, stands watch over the table that is permanently set for the "Missing Man” and generally touches the lives of hundreds of people in Lakeside through her volunteerism at the VFW, with the Woman’s Club, and as a member of the El Capitan Stadium Association.
Joined VFW in 2012, Life Member, earned eligibility in Desert Shield/Desert Storm in 1997 aboard the USS Constellation CV-64 earning Armed Forced Expeditionary Medal and Global War on Terrorism Expeditionary Medal.
Post Commander 2017-2018 earned All State
Post Commander 2018-2019 earned All State/All American
Post Commander 2019-2020
District 1 Senior Vice Commander 2019-2020
Senator Joel Andersons Women of the Year 2018
Senator Joel Anderson Veteran of the Year 2018